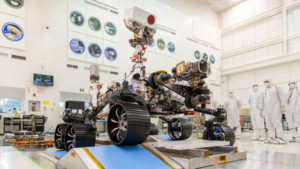 National Aeronautics and Space Administration (NASA) declared the name of the 5th Mars (red planet) rover as Perseverance. Previously the rover was known by its code name as Mars 2020. The name was given by Alexander Mather, 7th standard student and was declared by Nasa’s director of science, Thomas Zurbuchen at an event in Lake Braddock Secondary School in Burke, Virginia. The Perseverance rover will be the 5th exploratory vehicle after Sojourner, Spirit, Opportunity and Curiosity.