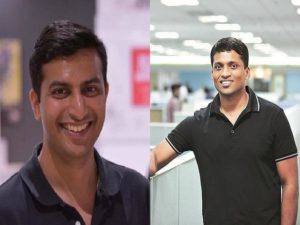 Byju Classes’ founder Byju Raveendran and Zomato’s co-founder Gaurav Gupta are among the five Indians named by the World Economic Forum (WEF) in its new list of 115 Young Global Leaders. Raveendran, who released Byju’s as a learning app in 2015, calls himself a teacher by choice and an entrepreneur by chance. Gupta’s Zomato has been a pioneering food technology start-up, which he released as a table reservation business and then scaled it up across India, the UAE and Australia. The other three Indians on the list includes Tara Singh Vachani (CEO of Antara Senior Living), Vinati Mutreja (Managing Director and CEO, Vinati Organics Limited), Swapan Mehra (CEO, Iora Ecological Solutions).