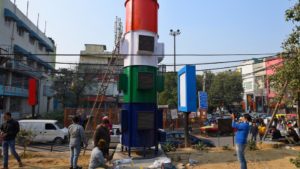 Delhi’s first smog tower will start working at Lajpat Nagar central market. The 20-feet-tall tower is fitted with exhaust fans to suck in polluted air and can remove up to 80% of the particulate matter (PM 2.5 and PM10). The smog towers were to be installed on the lines of China, which has experimented with this technology.

A separate pilot project has been proposed to consider the efficacy of smog towers and this is being undertaken by the Indian Institute of Technology-Bombay (IIT-Bombay) in collaboration with IIT-Delhi and the University of Minnesota.

This tower will purify the air within a circumference area of up to 750 metres. Such initiatives are important to combat air pollution in Delhi, which has also become a pollution capital. In February 2018, the Delhi government had installed an anti-pollution tower at ITO in central Delhi on pilot basis.